When Cheeba was growing up with us we still lived with my parents in a bigger house so she always had someone to spend time with. After a while we were able to finally move out to live on our own. We rented an apartment , not a perfect place for dogs but we had the ground floor with back door opening to a big grass area so it was making up with it. With both of us working Cheeba often had to stay alone even though we tried to minimize the alone time by coming home on lunch breaks. That was until we decided she should have a companion. Even when common sense together with our landlord said no we decided to get another dog anyway.

We got this litt… not so little dog which more often resembles a bear cub especially in the way she runs, to make our Cheeba happy.

Even though she was form a private house by all means she can be called a rescue dog. She was not vaccinated, slightly malnourished, definitely beaten, terrified of men and children as well as involved sexually with siblings, father and other local dogs in the first 6 moths of her life which caused very serious problems which I’ll talk about later.

The first day we took her home she was interested in everything we were doing yet still very scared and would run to a corner when we did any sudden moves. Luckily she got on with Cheeba very well instantly. Walks to the park were often difficult, all depending on time. When there no people she was behaving like a perfect dog, didn’t even pull on the lead, but when there were people around especially kids and sometimes cars making noise she started to panic and wanted to run straight in amok. The fact that our apartment was adjacent to a primary school which was next to the only park in town didn’t make life easier. I consider myself fairly strong and trying to hold her while 50 little girls scream and reach out to her was a real pain in the ass. Fortunately since we recently moved she calmed down a lot.

At the beginning her separation anxiety was a big issue, since the apartment was not very big she couldn’t unload her energy and stress in a lot of ways so she ended up destroying a lot of things. Every day something different, from toys to shoes, books, documents etc, one night I left the living room opened at night and didn’t expect her to do anything while we are home but she decided differently and chewed our leather couch. Every time we went to work we worried if she will destroy something or not, hiding all valuables from sight yet it didn’t work, she always found something. We were tired of all the destruction so I decided that when we leave I will lock her in a hall where there was literally nothing and yet she started to chew on the floor skirting. So I bought an anti-chew spray sprayed half of the house, she stopped eating the shoes  but that’s all it did as she kept on chewing. It was the second or third time I decided to leave her in the hall and it was a huge mistake as this happened.

Yup she destroyed the feckin wall, isn’t that some desperation. And if that wasn’t enough the next day our landlord called he wants to do an immediate inspection because one asshole from management reported us for having another dog. I was able to postpone the inspection and  got to work with the help of the family and fixed it and no difference could be noticed.

In the end the solution was a muzzle which we put on from time to time.

Since then everything was fine and she became a lovey-dovey and didn’t want to leave our side, even now just a glance at her causes  her to wag her tail lay down ears to the sides and run to us happily licking and jumping.

Some time later it was time for Luna to be finally in heat, we thought she was until after one day of bleeding like she should she started leaking some kind of milky slime. Of course we went to the vet he gave her a shot and told to observe for changes. Unfortunately it was only getting worse, next visit to the vet was exactly the same, third time lucky or not so lucky for Luna. They have finally diagnosed a severe cervix infection which would definitely kill her within days. She had to stay with the vets for an operation during which they had to remove her uterus, ovaries and some associated parts which I can’t remember the name.

Thankfully she quickly recovered and joined us the next day, she was still sore and had stitches as well as antibiotics. We had to be extra careful to not tear the stitches as the were across her whole stomach and we had to regularly check if she is not bleeding. After the removal of stitches she was back to full health and happier than ever and to this day she acts the same like a little puppy which is about to get a treat. Every time she sees us even when we were just in a different room for a minute  she gets super happy and starts licking us. Maybe she knew she dodged the bullet and is grateful for every moment.

Now Cheeba and Luna have a lot bigger home and are happy as ever and are almost inseparable, they get anxious when one leaves the other and try to look for each other.

So that is her back story, and of course more recent events will be posted soon and some more pictures below. 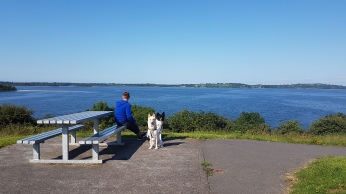 Did I mention she loves putting her head out of the window when driving? a lot more than Cheeba does, have a look.

Starting my first blog Penumbra. Read the introduction in the beginning to find out whats it all about and who am I. View all posts by Bartek D